Gerry and Bonnie will soon welcome us as hosts for the Galax, VA, rally May 18-22. Bonnie is actually a native of the area as she grew up in Boonville, NC, only 38 miles SSE of Galax. Her family still has a "mountain home" near Galax and she has fond memories of spending time there. Her father's family were tobacco farmers. One of the places Gerry and Bonnie enjoy traveling to is Simcoe ON, Canada because during the depression of the 30's Bonnie's mother’s family moved there along with many other tobacco farmers to find work in Canada's newly developed tobacco farms. They were welcome advisers because they knew how to cure tobacco.

Gerry is also a native North Carolinian, growing up in Wilson, NC. Gerry and Bonnie met in Winston Salem and lived there for 18 years. Bonnie and her cousin were looking for a place to live and the manager of an apartment complex told them about two apartments that were available. The manager said one of the apartments had two guys living on one side, and three guys on the other. Bonnie quickly replied, "We'll take that one." Sure enough it turned out that Gerry was destined to become her special one.

While living in Winston Salem, Bonnie worked in accounting for L'Eggs Hosiery, but now she does volunteer work. She prepares tax returns for AARP, and works with Meals on Wheels. She also volunteers with her church, but one of her favorite things to do is being with her grand kids. The Keens have two sons. Scott and Nicole have Bonson and Grace and they live in nearby Denver, NC. Scott is a pilot for American Airlines. Son Paul and Audrie have Christopher and Gracie. Both Scott and Paul are pilots like their dad.


Gerry grew up around airplanes as his dad had two planes, the last being a Taylorcraft. Gerry didn't take a straight line into the aviation industry though. He began working in the financial industry with GMAC in Rocky Mount NC in the mid sixties. However, working in finance could not compete with the beautiful Martin 404 passenger planes he would frequently see at the airport. "I loved the sound of the engines" Gerry says. He was hooked. That's when he decided he wanted to be a pilot.

The Piston and Propeller Era:

He took some pilot training in Rocky Mount, but then trained in St. Petersburg/Clearwater, FL  winding up with a multiple engine rating and was certified to teach flying and instrument rating. He then went back to Rocky Mount and took an entry job as a flight and instrument instructor. His career really took off when he was hired by Piedmont Airlines where he initially flew the Fairchild FH-227 and the Nihon YS-11 turboprops of that era. Later in his career he flew Boeing 727's, 737's, and 757's. At the end of his career he was flying the Boeing 767 on the trans-Atlantic route to London, Paris, Frankfort, and Madrid.


Piedmont Airlines merged into US Air in 1989 and  Gerry retired from US Airways is 1999.


Now that they are retired Gerry and Bonnie are enjoying a lot of time RVing, but their RV career began in the early nineties. They had a van and attended motorcycle races. The next step came through a friend of Gerry's whose father lived in Anchorage, AK. He set up an itinerary for them to tour Alaska, and they rented a Class-C. It was a great trip that caused them to want to buy their own Class-C in 1997. Through the years they progressed through Class-A, Class-A diesel, and then finally to Country Coach.

Gerry and Bonnie are looking forward to showing us the mountain area that is so special to them. They want to share the beauty of the area, the music, and the culture, as well as the many activities.

Posted by BusBloggers at 8:06 AM

Please see the Feature Article about the Bowens and their bus conversion in the post below.
Also, view my photos from the Orange Beach rally Orange Beach Rally Photos


We have been very fortunate to have Craig and Bev Bowen of Villa Rica, GA as guests of Charles and Elaine McGarity at the New Orleans rally and now in Orange Beach, AL. Craig and Charles met through their work in the transportation and logistics industry.

This is the story of a very hard working couple with an interesting retirement dream. Craig manages a transloading facility in Fairburn, Georgia, where freight is off-loaded from the CSX railroad onto trucks. Bev works for Delta Airlines where she builds the flight schedules for Delta in and out of Atlanta. She determines what aircraft will fly what route and when. She builds the schedules three months out, so at the time of the interview in mid-March, she was working on the June schedule. Both Craig and Bev often work 7 days per week. In addition Craig works a second, part-time job earning "bus money" cleaning and inspecting food grade grain-hauling rail cars at another facility. He is actually an inspector looking for insect contamination in the grain cars.

Craig and Bev met through mutual friends, and now have three grown sons living out of state, and five grandchildren. Bev had some RV travel experience when she was a teenager, but it is not the fondest memories for her; there are things a teenage girl had rather be doing than traveling with grownups in an RV.  Nonetheless, she now enjoys traveling in the bus with Craig.


Bus or boat? That is the question Craig Bowen confronted about five years ago when he began to think about a retirement hobby. Craig grew up learning how to work on and build things. He has always been handy and he loves to work with wood. He finally decided that a bus would be more practical because he and Bev could go more places.


Craig grew up in East Liverpool, OH, on the Ohio river where he was always around boats. The famed Delta Queen paddle wheeler was a frequent sight, and his particular love was wooden boats. The beautiful mahogany wood used in the construction of the classic Chris Craft yachts was an inspiring example for Craig.

Craig took a fork in the road and chose a bus, but he expressed his love of boats by incorporating a marine theme for the interior. In this picture we see some of he beautiful mahogany Craig chose for the bus. Craig commented, "I love wood and I wanted it to look like a yacht."


Here are some more examples of the African mahogany wood chosen for the bus. This picture shows the ceiling with 3/4 in. pine marine lap on the sides. The custom A/C vents had to be made to an exact size in order to properly distribute the air flow:

When asked what feature of the coach are you the most proud of, Craig said, "The island galley, and the water closet with hand made copper sink  ." Bev said, "I really love the dark wood." One of the biggest frustrations for Craig is finding time to work on the project considering his demanding work schedule.

Note the pipes are copper too:

The vanity sink is pure copper as well:

The water closet door has a nautical theme with port hole and monkey ball pull:

Note the AC breaker panel is hidden behind the water closet mirror: 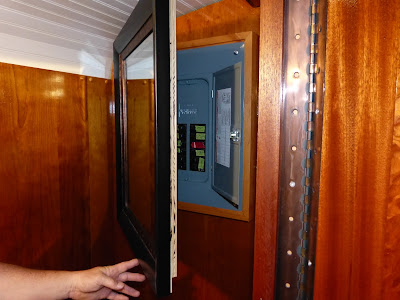 The island galley with its induction stove top, the two drawer refrigerator, dish washer, and storage drawers are a focal point of the main salon.

The Bowens chose all residential grade appliances and fixtures for the coach including this Summit Professional  washer/dryer: 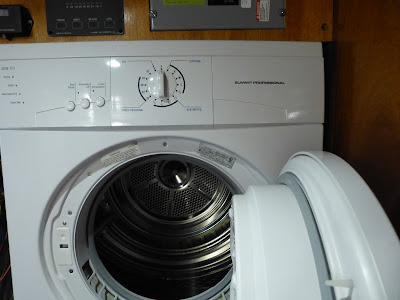 The entryway of the bus remains a work in progress, but note the clever use of brass marine cleats as stair rails: 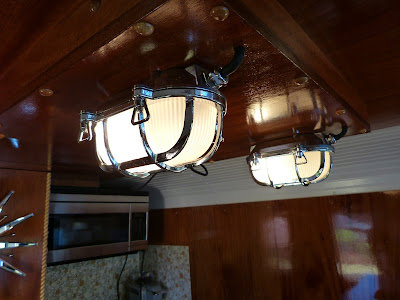 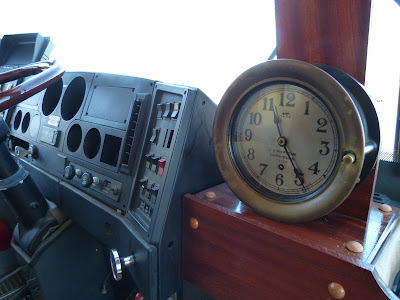 The Bowens wanted a warm, cozy atmosphere, so Craig added a fireplace in the salon and bedroom. Note the TV rises from the fireplace cabinet via remote control: 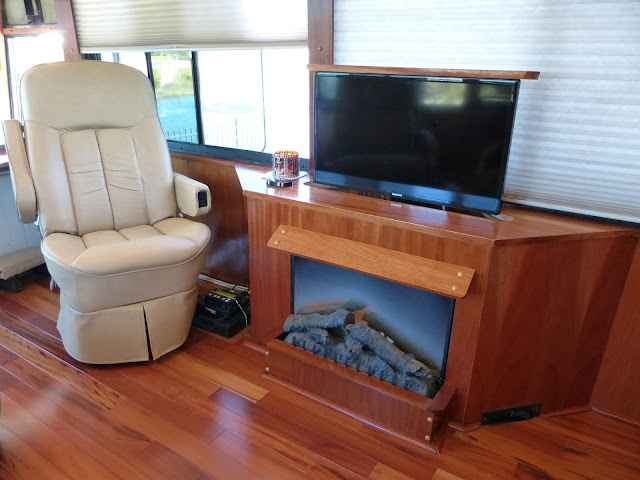 The bedroom wall opposite the bed contains drawers, and the back of the coach is a full-width closet with hanging storage and more drawers.

The fire ax is a vestige of the bus's commercial vehicle past: 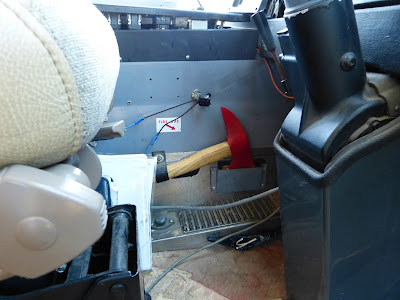 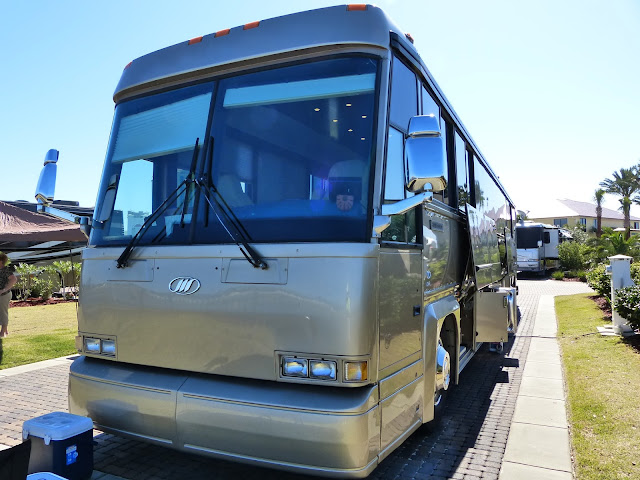 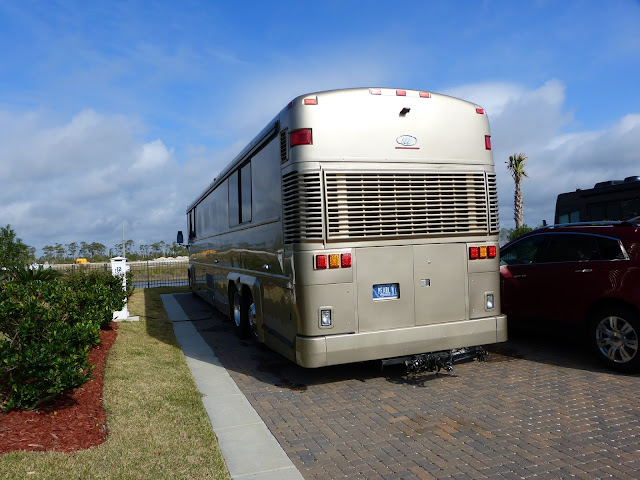 The bus is a 1995 MCI 45 ft commercial motorcoach that was in charter service. It was involved in a fire that damaged the roof and was acquired by a Mr. Raymond Cox. Mr. Cox, now retired, was a 2-cycle Detroit diesel engine guru and go-to guy after Detroit Diesel discontinued the 2-cycle engines. Mr. Cox bought the bus after the insurance settlement with the owners and re-skinned the roof with new aluminum. He completely refurbished the chassis and painted the exterior. Considering that MCI rates their commercial chassis @ 300,000 miles or 30 years, Craig and Bev should be good to go for a while.

When Craig bought the coach about five years ago, the interior was an empty shell. One of his first challenges was insulating the shell with spray foam which had to be trimmed to fit:

Craig can adjust the horsepower of the Detroit Series 60 engine via software and currently has it set at 435 HP. Note one of the large cooling fans is dedicated solely for charge air cooling.

The 20 KW Power Tech generator could power three or four coaches, and Craig plans to set up such a mother ship configuration to supply traveling buddies with power when they are in dry camp situations.

What amazing craftsmanship has gone into turning this commercial motorcoach into a retirement dream. SECC is fortunate to have Craig and Bev join our rallys from time to time, and we hope to see more of them. We will look forward to seeing project updates and look forward to the day when Craig and Bev can retire and enjoy traveling more in their beautiful retirement dream.

Posted by BusBloggers at 5:40 PM 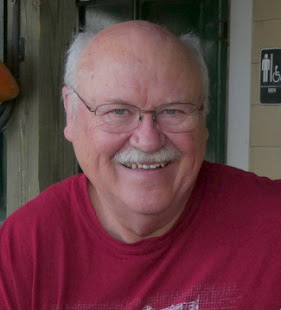 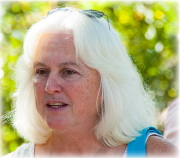 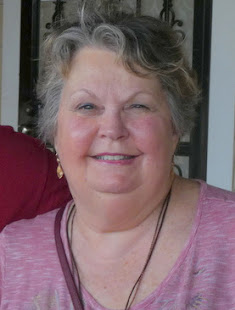 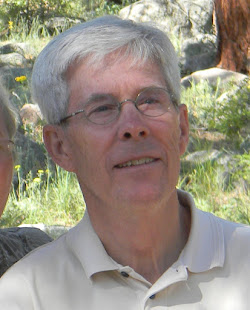 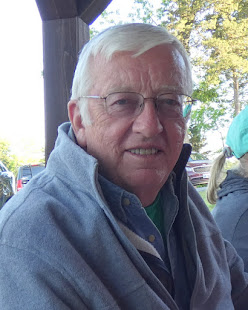